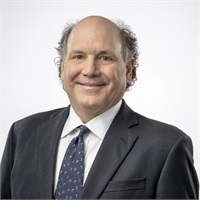 Mark’s interest in the financial business began when he purchased his first stock—Disney—at age twelve, but his fascination with rocks and fossils won out, and he earned a degree in Geology at Sul Ross State University in Alpine, Texas. Soon after graduation, he followed in his father’s footsteps and joined Equitable/AXA, where his father had a long and successful career. In addition to his securities licenses (he holds the series 6, 7, 63, and 65) Mark holds Texas insurance and Texas real estate licenses, as well a private pilot license.

Since 1992, Mark has hosted the Friday afternoon drive-time segment of Texas Renegade Radio on KNON 89.3. It’s one of the longest-running radio shows in Dallas, the fifth largest radio market in the US.

He serves on the board of Chase’s Place, a private, nonprofit school serving students with moderate to severe developmental disabilities. He is also president of the North Texas Music Foundation and in his spare time, he enjoys welding and working with metal.

Mark is a lifelong resident of the Dallas area (he graduated from Hillcrest High School). When he and his wife, Barbara, aren’t exploring the back roads of Texas and seeking out great live music, they’re enjoying their time in Taos, New Mexico.